Reception of the “Lorsch Gospels” in the Carolingian Age

Around 810 the "Lorsch Gospels" (Alba Iulia, Bibl. Batthyáneum, Ms R II 1 and Vatican, BAV, Pal. lat. 50) were created. It was the last in a row of illuminated manuscripts which were produced at the court of Charlemagne. Presumably it was given to the Abbey Lorsch as a present shortly afterwards. Some Lorsch manuscripts from the 9th century were influenced by its decoration, namely its canon tables, illustrations and ornamental frames. 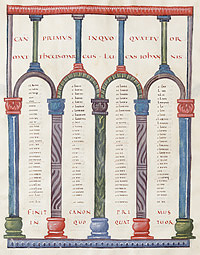 In several gospels, which were compiled in the second quarter of the 9th century in Lorsch and which form the starting point for research on the Younger Lorsch Style, the depiction of frames decorating the canon tables reveal that their source of inspiration were the "Lorsch Gospels" (Alba Iulia, Bibl. Batthyáneum, Ms R II 1, pagg. 13-24), even though none of them equal its splendour. The "Folcwich Gospels" (Los Angeles, J.P. Getty Museum, Ms. Ludwig II 1, foll. 4r-9v) – named after its receiver, the Bishop of Worms (in office during 826-838) – adopt the ladder-like grid for structuring the field between the round-arched frames, dividing it into groups of fives for the passages of the evangelists. This structure was presumably added later, albeit in a rudimentary form, in the first three canon tables in the "Seligenstadt Gospels" (Darmstadt, ULB, Hs. 1957, foll. 10r-15v), named after the place it once was held at. Analogies from this manuscript to the "Folcwich-Gospels" can be found in the bulbus bases of the round-arches or tori, as well as in the decoration of the columnar surfaces, that give them a certain plasticity. In the upper sections of the canon tables there is an unusual, structural irregularity, which is a direct reference to the "Lorsch Gospels": on top of the round arches of the lower columns a second, smaller row of columns has been placed, which carries the rectangular frame for the title. In the "Lorsch Gospels" the round arches are placed on small columns – consisting of a base, a short shaft and a capital – which have been set on the capitals of the lower columns in order to carry figural and organic ornaments that support the title of the table below. In the gospel book, which later came into the possession of Bamberg Cathedral, eight conserved canon tables have been depicted with a simple linear frame (Bamberg, SB, Msc. Bibl. 93, foll. 7r-10v). The antique-like title frames in the form of Tabulae ansatae still indicate the "Lorsch Gospels" (Alba Iulia, Bibl. Batthyáneum, Ms R II 1, pagg. 13-15, 18-19) as the source of inspiration.

Portraits of the Evangelists 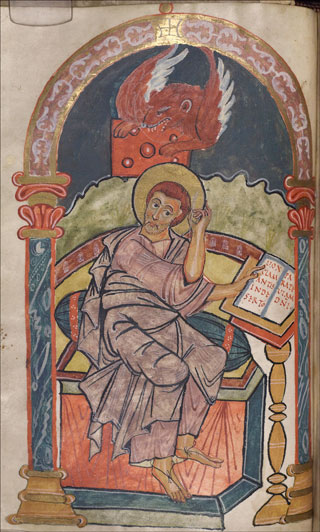 A luxuriously decorated manuscript (Manchester, John Rylands Univ. Libr., Ms. 9) which today is held in Great Britain has lost its canon tables. However, it does contain a multicoloured portrait, partly worked in gold, of the evangelist at the beginning of the gospel of Mark (fol. 50v): Mark is sitting on a throne about to start writing. With his left hand he is holding his nib to his ear apparently waiting for inspiration. His right hand is reaching towards the left side of the desk, where an opened book is lying. The opened pages show a verse from the beginning of the gospel: Vox clamantis in deserto: Parate viam Domini! The evangelist is framed by an arcade, and in its round-arch the symbol of the evangelist, the lion, is depicted in red on a blue background. The agreement or similarity of even the smallest details shows that this miniature was inspired by the "Lorsch Gospels" (Alba Iulia, Bibl. Batthyáneum, Ms R II 1, pag. 148) – even though some doubts have indeed been raised: for example the pose of the evangelist, in particular the gesture of his hand examining the nib, the depiction and flow of his cloak, as well as the presentation of the evangelist symbol as a half-figure with a linear halo or nimbus, and white and blue downy feathers in the wings. The depiction of the arcade frame and the back of Mark’s throne, furthermore, show similarities to the portrait of Luke in the "Lorsch Gospels" (Vatican, BAV, Pal. lat. 50, fol. Iv).

The influence of the "Lorsch Gospels" can also be detected in a sacramentary. It was presumably created in the third quarter of the 9th century in Lorsch, and today only fragments of it remain (Erlangen, UB, Ms. 2000 and Augsburg, UB, Cod. I.2.4° 1). The fragment from Erlangen contains the multicoloured front page to the Canon Missae: on a crimson background the TE-ligature is depicted in a framed medallion on a blue background. The entire ligature is embraced by two columns supporting a frame decorated with palmettes, fretwork patterns and scrolled ornaments. The T is carried by an angel in a small green medallion. The stem and the crossbar of the T bear five squares, the top middle square showing the half-length portrait of Christ bestowing his blessings. The other squares contain the first words of the Canon missae: Te igitur clementissime pater. The palmettes in the frame of the blue medallion, as well as the golden outlines of the medallion with its alternating semi-circular and oval indentations, all resemble the arch in the portrait of Luke in the "Lorsch Gospels" (Vatican, BAV, Pal. lat. 50, fol. Iv). The split capitals of the framing columns with their palmette-motives can also be found in the fourth canon table of the "Lorsch Gospels" (Alba Iulia, Bibl. Batthyáneum, Ms R II 1, pag. 16). Apart from these features, there are further decorative elements which have been inspired by the same source. 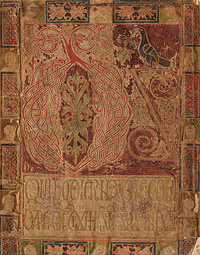 Such examples of replication can not be found in two fragmented leaves from Augsburg with a decorated initial page for Pentecost (Augsburg, UB, Cod. I.2.4° 1, fol. 1r): here the two areas in the centre of the page are framed by 24 squares and rectangles, surrounded by a red-line border. Eleven squares are filled with the heads of Apostles under tongues of red fire, and a badly faded area in the middle of the top frame, presumably with beams of light, represents the miracle of Pentecost. The intermediate rectangles contain interlacing ornaments and acanthus motifs. The inner panels hold the initial words for the first prayer of the Pentecost service: Deus qui hodierna die corda fidelium sancti spiritus inlus/tratione. In the top area with a crimson background the first word (Deus) is abbreviated. The D is written in uncial form, its corpus made out of interlacing ornaments ending with two opposing animal heads, and its centre is filled with two acanthus plants. The S is depicted in Insular form with interlaced knots. A dove holding a branch in its beak is sitting on top of the S and thereby providing an appropriate and original substitute for the abbreviation dash. The rest of the passage is written in a decorated Insular alphabet in the lower section in golden ink, which has also been implemented in other places.

The "Lorsch Rotulus" (Frankfurt/M., StUB, Ms. Barth. 179) is about from the same time and is linked to the sacramentary fragment from Erlangen and Augsburg through its script. The margins of the roll holding the litany of the saints are decorated with a multicoloured ornamental band with interlacing ornaments and oval forms, and a surrounding double-line border. The ornamental band is intermittently adorned with single squares bearing cross-shaped flowers and quadrilobes. It is not surprising that similar forms can be found in the "Lorsch Gospels" with its broad variety of frames and margins. However, they are not directly linked with the "Lorsch Rotulus" and show a higher quality of execution. But the sacramentary fragment in particular, which according to palaeographic research is related to the "Lorsch Rotulus", indicates that Lorsch in those days had achieved a high quality in the art of illumination. The splendidly decorated pages are certainly only a fraction of what has survived. But although many testimonies have been lost today, and, thus, our knowledge of the art of illumination in Lorsch remains fragmentary, the small number of illustrations compared to the large amount of existing manuscripts from Lorsch cannot conceal the fact that the richness in motifs and forms from the "Lorsch Gospels" only brought little inspiration to the Lorsch illustrators in the Carolingian age.