Virtual Compilation of the Medieval Monastic Library of Lorsch

Ministers from Hesse and Baden-Württemberg present the unique project 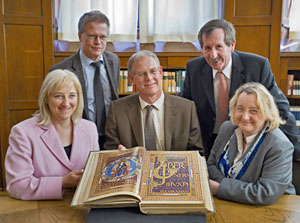 The unique holdings of the medieval monastic library of Lorsch, currently scattered over 68 libraries worldwide, are being recompiled into a virtual library. In cooperation with the Administration of State Houses and Gardens in Hesse, Heidelberg University Library has been working since March of 2010 to publish the 330 surviving Lorsch manuscripts and manuscript fragments online. The project by the name of “Bibliotheca Laureshamensis – digital” is being funded by the State of Hesse with approx. 450.000 euros and will continue through 2013. Eva Kühne-Hörmann, the Hessian Minister of Higher Education, Research and the Arts, and her counterpart from Baden-Württemberg, Theresia Bauer, Minister of Science, Research and the Arts, presented this unique undertaking to the public in Heidelberg on 23 March 2012.

“The virtual reconstruction of the former library of Lorsch Abbey, now a UNESCO World Heritage Site, gives us the chance to study the abbey’s intellectual foundation, and the Carolingian world view in general, in depth for the first time”, said Minister Kühne-Hörmann during the presentation of the project. “This outstanding endeavour, which is of great interest to the State of Hesse, has united experts from Hesse and Baden-Württemberg in an exemplary, cross-border cooperative effort that reflects the historic significance and geographical location of the monastic library of Lorsch between the palatinate and the diocese of Mainz.”

The “Bibliotheca Laureshamensis – digital“ project will see the digitisation of the abbey’s codices. In addition, scientific descriptions detailing the origin, owners, appearance, handwriting and content of the library’s manuscripts will be compiled in a project database. For the first time, researchers will have comprehensive and systematic access to the Lorsch manuscripts, a fact that opens up entirely new possibilities of research. “This is the first time that a digitisation project for the virtual reconstruction of a medieval library is compiling manuscripts that have been scattered so widely throughout the world. The project’s international character makes it a pioneering achievement in the field of manuscript digitisation“, said Minister Bauer and referred to the expertise of Heidelberg University Library and the comprehensive digitisation activities in Baden-Württemberg that are supported by the Ministry of Science, Research and the Arts.

Lorsch Abbey, located between the Rhine River and the Odenwald mountains, was founded in 764. Its scriptorium and comprehensive library made the abbey an exceptional centre of knowledge in the Carolingian era. “Lorsch was one of the centres in which the heritage of the ancient world was preserved and also increasingly transformed through transcripts, comments and editing. The abbey provided an immense knowledge transfer for Carolingian and medieval culture”, states Karl Weber, Director of the Administration of State Houses and Gardens in Hesse. Even for the humanists of the 16th century, Lorsch was so interesting that the manuscripts became the basis of the library of Elector Palatine Ottheinrich, the Bibliotheca Palatina in Heidelberg, and contributed much to its fame.

The medieval library holdings are mostly vellum manuscripts dating back to the 8th and 9th centuries, the golden age of the scriptorium at Lorsch. They include outstanding works such as the “Codex Aureus of Lorsch”, arguably the best known and most precious item of the former monastic library, the 5th century “Livius”, one of the library’s oldest books, or the “Lorsch Rotulus“ a litany of saints for Louis the German. “The complete digitisation of the Lorsch manuscripts in the holdings of the Biblioteca Apostolica Vaticana is a particular achievement of this project”, explained Dr. Veit Probst, Director of Heidelberg University Library. 133 manuscripts of the former monastic library have found a home in Rome. For its project, Heidelberg University Library was given permission to digitise the Lorsch manuscripts on site at the Biblioteca Apostolica Vaticana.

By now, more than half of the 330 manuscripts are online, among them codices from well known libraries like the Bavarian State Library in Munich, the Austrian National Library in Vienna and Zurich Central Library. The old Carolingian library catalogues of Lorsch Abbey were also of central importance to the project – without them, a reconstruction of the former library holdings would have been impossible. For more information on the “Bibliotheca Laureshamensis – digital“ project, go to www.bibliotheca-laureshamensis-digital.de/en/index.html.